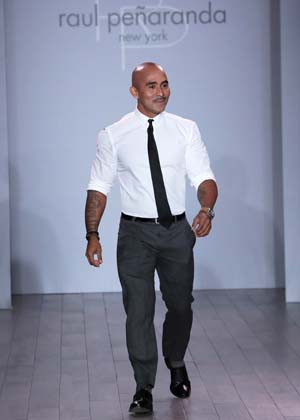 New York designer Raul Penaranda has been making his dream a reality designing luxury women’s wear with an aesthetic that stands apart with a mix of edge and sophistication. Through this uncompromising style, Raul has  dared to be himself and only two years after debuting at Mercedes Benz Fashion Week was declared by FORBES magazine as one of the fastest growing fashion entrepreneurs to come out of the small business industry with his 100% USA manufactured ready to wear fashion line for women.

Raul was born in Cali, Colombia. He grew up in Caracas, Venezuela and moved to Miami, Florida with his family as a young adult. In 2000, Raul relocated to New York City where he was offered a freelance design position at Liz Claiborne, while enrolled at F.I.T and Parson’s. Over the
next ten years, some of the industry’s most established fashion houses felt his
creative impact such as Oscar de la Renta, DKNY and Tommy Hilfiger. He has held key positions as Creative Director of Merchandise and Trend Services, Senior Designer and Textile/CAD Designer.

Recently during New York Fashion Week, Raul’s burgeoning style culminated in a tremendous showcasing of ready-to- wear designs for Fall / Winter 2017 entitled ‘IGNITE’. Presenting to one of his largest audience to date, Raul did not disappoint as his models posed in designs influenced by the classic style of Film Noir. The result provided looks that were refined and sophisticated, yet sexy and playful, all of which has gained him recognition from the CFDA. Still, Raul is only getting started and with twelve seasons of inspiring collections there is only one demand from the designer … show the world who you are.